Dear forum members,
My (real) name is Marcel, I am an engineer with a degree in electrical engineering, journalist and author from Germany. I have been around for quite some years and I took my first steps in recovering and refining right here at (the old) GRF forum.

After a very long preparation time, I have finished my translation of C.M. Hoke's book: "refining Precious Metal Wastes" to German language.
There may not be so many German speakers around, but I will outline some of the changes that were done to the original text in English.
Here is a look at the cover:


First of all, this is not a modern version of the book. It is a translation. It is situated in the time when the original text was written. So most methods remain the same.

Additions:
Added some warnings whenever regarded appropriate, such as: working with cyanides, mercury, lead, explosive compounds etc.
Added some advices as proposed by FrugalRefiner in his PDF version.

It appeared that C.M. Hoke almost never gave any exact temperatures, sometimes no exact weights, instead just saying to "heat" or "boil" liquids or use "some" instead of saying "add 5g of". I tried to fix that wherever possible.

In 1940 there was barely any plastic known, so expressions like "shellac" were changed into "plastic" (Which did not exist at that time, so you see that the translation is not historically correct)

As you can see the German title now is "Edelmetall Recycling" which would translate to "Precious Metal Recycling". The word Recycling itself includes the use of a secondary source (wastes), so that the German title itself gives you an idea on how this translation was made.
The word "Recycling" itself did not appear even once in C.M. Hoke´s book. It was simply not in use at that time. Similar approach was used for translating "to refine" or "to recover", whereby the differentiation and translation was not always easy in German.

Parts cut:
- Some outdated safety recommendations
- All procedures that require cyanides for recovering - these are no longer available for everyday users anyway, and they are simply far too dangerous to handle for the novice.
- Parts that dealt with cyanides solutions were maintained, since it can still happen that a refiner gets in touch with such materials. It may be important to know what the dangers are and how to handle them (no acid addition, etc.)
- legal information (outdated and if not only valid in US)
- Shortened the part on large scale refineries
- Some pencil drawings removed who were either low quality or had little value of information for the reader

80 years (since the book was first published) has been a long time. Our language, also the English language, has changed ever since. So some long-winded sentences sometimes had to be broken up into 2 or 3 short ones.
Here are some early previews of the book:


Please note that they were taken from an early version, so content and look may be different in the final book.


Instead of 384 pages, the book now has condensed to 282 using a 10p font and removing a lot of redundant stuff from the original, I would say it is an almost complete translation. Since the information in it has become denser, I find it even much more useful.

At the end of the translation, I added some bibliographic information on the life of C.M. Hoke, which will be free for the users of this forum to read. It is by far not complete, and it is in German.
I have added this .pdf as an attachment to this post. If you do not know who C.M. Hoke was, better save reading it for later. read the book first...

There has been a great support from the GRF forum with this project over all the years. I will not start to name them all here, since I would surely forget the one or the other. But you know them all! Special thanks to Dave.

The book can be purchased via Amazon (use https://amzn.to/2YrXkmD) or the publisher website ( https://www.adrenalinemedia.de/product-page/über-die-kunst-edelmetalle-aus-abfällen-zu-gewinnen.

If you contact me through this forum, I can give you a bonus code with around 25% off, for a limited number of copies, but at this very moment, I myself have not seen the printed book yet.
So bear with me, I am not too much into the commercial details.. I am just happy I finished my part almost in time.

PS: There will be an ebook version! But this one will take some more weeks, because it will be very richly filled with many additional functions and information like videos, wikipedia articles etc. So not just a simple PDF and more information on C.M. Hoke. The ebook is free with every purchase of the printed book.

Wo!
That is a bit of work!
Well done for putting the effort into spreading nonage.
Though, English has long been accepted as the scientific language.
https://www.ncbi.nlm.nih.gov/pmc/articles/PMC3341706/
T

So when can we expect the English version?


Edit to add
I would be interested in a full size pdf of the "girl expert on precious metals" paper that features her, and the moderately sexist subtitle

@justinhcase:
No doubt about the significance of the English language in science. But I would not rate this translation as a scientific one. I am also not a scientist. The intention was to make the text available to my audience, of whom many do not understand English very well. In most cases, they are small refiners with no scientific education.

@Topher_osAUrus: That is a plan. But my English is not good enough for that purpose. It takes a native English speaker. That person must not only be a translator, there must be sufficient understanding of chemistry as well. As said before, I did transform many long-winded sentences into several shorter ones, so that will make a translation easier. Maybe in 2022..
As for the attached short PDF: I will make an English version in the days(?) or weeks, and then repost it here.

Attached is the article on the "Girl Expert on Precious Metals"
View attachment The_Brooklyn_Daily_Eagle_Sun__Aug_21__1927_.pdf

Marcel said:
@justinhcase:
No doubt about the significance of the English language in science. But I would not rate this translation as a scientific one. I am also not a scientist. The intention was to make the text available to my audience, of whom many do not understand English very well. In most cases, they are small refiners with no scientific education.

@Topher_osAUrus: That is a plan. But my English is not good enough for that purpose. It takes a native English speaker. That person must not only be a translator, there must be sufficient understanding of chemistry as well. As said before, I did transform many long-winded sentences into several shorter ones, so that will make a translation easier. Maybe in 2022..
As for the attached short PDF: I will make an English version in the days(?) or weeks, and then repost it here.

Attached is the article on the "Girl Expert on Precious Metals"
The_Brooklyn_Daily_Eagle_Sun__Aug_21__1927_.pdf
Click to expand...

I hold that anyone who makes an observation that describes a problem, create a hypothesis, test the hypothesis, and draw conclusions to refine that hypothesis is a scientist of some sort or other.
Critical thinking is a key component of the scientific method. Without it, you cannot use logic to come to conclusions.
That is the gift Ms Hoke gives us, not simply the mechanical method.
But her teaching style is one of guided observation and logic.
She does not give you every answer, instead she teaches you to think critically as a refiner, so you can solve your own problems.
Have you read Mendeleyev's Dream: The Quest For the Elements yet?
Most of the people whose shoulders we stand on made themselves scientist through their own self education.
If you would like to post a copy on the Ms C.M.Hoke Facebook page please do, I think we have a few German speakers who are members.

@justinhcase: OK, I will rethink that....
As for the facebook group: Thank you for the hint. I have canceled my private account many years ago (and I am very happy with that decision) and will check if the publisher can supply some material to them.

Btw. Another spoiler: The Hoke family might have been of German origin. But that is another story to tell, some other day ;-)

I just found another of my postings from 2012:
Translating Hoke's Books

Just to show, that this project has been in my head for quite a while.
What about Rusty? Is he still active? Has anyone here any contact with him? Or contact details?

Just some examples of the look of the book now. I know, most of you don't speak German, but just to give you an idea of the look and feel...
Anyone who knows the book, he or she will know the content anyway… 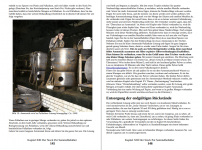 Some photos have been colorized and enhanced, partly by hand and partly using AI software
Hyperlinks have been added, which lead to Wikipedia pages (only useable in the e-book version of course), to allow quick information on scientific expressions or chemicals.

The flowcharts have been transformed into a modern style. Whenever dangerous chemicals appear, there is a warning and a hyperlink (like here when talking about the use of HF acid), so the novice reader can check the related and up-to-date safety or legal information.

These are screenshots from early versions, not everything is yet perfect. (typos etc.)

Sorry for double posting, but I didn't manage to have the pictures displayed in the right order.
Now these are the same pages from the original book, already enhanced by OCR by FrugalRefiner:

...so about that english version?..

I would not even think twice about paying $100 or more on an english copy.

Forgive me if I have missed it, but, have you advertised price and release date? (german, of course)
Id like to buy a copy of it, as well
(Physical. I like the feel and smell of the book in my hands.. but, that doesnt mean I dont get ebooks. Think I just passed 4,000 books in my eLibrary)

It is truly amazing the work that youve done. With my note10+ it is very easy to translate. ...though its a little rough around the edges (the native google translate program, that is), but if you do small bits at a time, then compare and contrast the full paragraph translation, it helps to iron out the wrinkles.

Kudos to you sir.
Thank you for your work

Marcel said:
Now these are the same pages from the original book, already enhanced by OCR by FrugalRefiner:
Click to expand...

I did not do the original OCR work. That was done by gustavus / rusty. Palladium made his version available to the forum. I used that version to start my work.

I always loved the front cover of Ms Hoke.
A man digging for treasure with a golden sun shining from behind his back.
Quite fitting really. 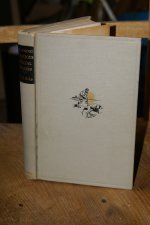 You must log in or register to reply here.

Gold in them thar hills

I
getting started 50/50 braze alloy