NO I am NOT CRAZY! But I do need some SERIOUS HELP WITH THIS ONE!

Ooookaay here's the situation (with any/all discovery/legal related rights fully reserved) I have found a "hidden loot" and I am in a very strange position with it. This is definitely one for those who know their stuff. The valuable loot has been sitting in conditions that specific to them allow them to be rapidly reclaimed by nature! The materials are mostly silver and some gold. The special environment? A creek that contains higher contents of sulfur in the water (all if the surrounding properties have well water and evey ones home stinks like rotten eggs when the water is turned on is how this conclusion is reached) and also they've been coated/embedded or are converting into carbon ferrous black shale....if the "top layers" are sanded off for a brief time you can see the letters and design outlines but shortly after the oxidation crap that is black recovers the letters. My question is this: is there a way to reverse the process of the sulfuric water attacking the silver so that most the silver will be retained or left behind? Since sulfur excels the process of oxidation, there has to be a reversal type of process to remove the sulfur? I've been soaking some in hydrogen peroxide and it is pulling the sulfur out but at 3% peroxide solution it's a huge time consumption that needs solution changed out multiple times. Would I have success if the peroxide was stronger? I've ordered pure peroxide crystals to make my own solution but want to ask the opinion of long time experienced real people who aren't trying to just get me to send them my stuff for their "processing methods"

I thank you in advance for your time and for this website being available! I am a lifelong learner and enjoy the whole process of learning but this situation is different than anything I've been through ever before and my plans regarding this have nothing to do with greed nor furthering myself or my position. Truth is that I want to learn, know, show, prove that what I've described happening is actually going on as a thought provoking way to hopefully add positive views on the recovery and mining processes, as well as personally get to determine with research who the rightful owner is and contact them myself. See I don't put any trust in the "official person's" to actually do this, for reasons I have witnessed myself and will not disclose here. So any help is gratefully appreciated and will be cherished.

By the way here a picture I forgot to put with initial post, as a visual to my situation and I guess proof of claim? I don't know but you can see the definite image/outline of designs. 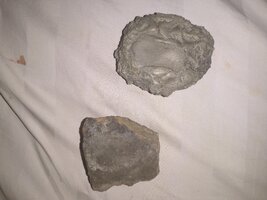 Put tarnished silver on Al foil, in a suitable container and pour on it hot baking soda solution. This will reclaim the silver
G

Lino gives a good starting point. I think, though, that your question would be better asked at a forum that regularly has discussions on artifact preservation. The Gold Refining Forum puts its efforts toward recovery and refining of precious metals, not artifact recovery and preservation.

galenrog said:
Lino gives a good starting point. I think, though, that your question would be better asked at a forum that regularly has discussions on artifact preservation. The Gold Refining Forum puts its efforts toward recovery and refining of precious metals, not artifact recovery and prese
Click to expand...

Lino1406 said:
Put tarnished silver on Al foil, in a suitable container and pour on it hot baking soda solution. This will reclaim the silver
Click to expand...

I attempted this method initially but after about 5 runs of it with fresh materials each time, I seen a very small difference and wonder if there's a method that might use less resources? See I have time a plenty even though I hope for fastest results, but funds to buy the needed materials for this method...as cheap as they may seem to be to some.....to be bluntly honest my current situation doesn't leave but a few dollars from my very limited budget, to buy the materials. Is there any similar method that would use material that lasted longer or was able to convert/reverse oxidation in a larger quantity? Like similar to the reversing method I've seen used on iron that comes from the ground and is rusted severe they use a battery and another piece of metal.... Is something like that possible maybe?

Just as a piece of info I thought I should let be known...when I initially discovered this I had no idea what it actually was, I was super excited because I thought I found a loaded vein...I literally couldn't contain my excitement! So I chose a place on the side of the creek and gathered some chunks as the evidence I'd need to file for claim and exploration permit....it wasn't until after I got home with this "ore" and began closely inspecting it that I seen my first hint that it was possibly more than shale under the black. My husband says I'm crazy..that it's just the way the rocks formed.....

Let me first say that I don't think you're crazy.

I reread your posts and studied your pictures. You say that you've been able to see the letters and design. Try as I might, I'm missing that. I can't really see what you mean. Perhaps it's just that the pictures don't show what you can see when you have these things in your hands.

Having said that, I've never dealt with sulfur in water, but I have experienced iron in well water. Nasty! It's fine as long as you're drinking it, but as soon as you stop, it tastes like you have a mouth full or nails. Yuck! So I'll believe you that you have sulfur in your water, and that probably means you could have a variety of sulfides and/or sulfates which could react with many metals. I've never dealt with material like what you're describing, but I've read many posts here and in my studies about dealing with sulfide ores. While there are a couple of approaches, the first one I would suggest in your situation is "roasting" the ores to volatalize the sulfur. It's just like it sounds. You heat the material for a period of time and the sulfur (or at least much of it) goes off in the fumes. Do NOT breathe the fumes.

Let us know if that accomplishes anything.

Dave
You must log in or register to reply here.

O
My Humble Thank You to ALL of You

B
Contaminants Not Dissolving