I got asked by someone in the German refining forum that I run, how to process silver from fixing bath.
Unfortunately the guy sieved the 100l liquid and then dried the powder to a mass of gray hard clumps.
I have zero experience with this kind of stuff, so I hope someone can help this guy who obtained 1.5Kg solid residues from the 100l fixing bath liquid.
Anyone around who still has experience on this material?

What could he do to recover the silver from 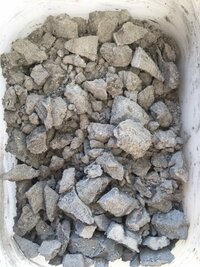 it? What is the compund ? Silver bromide? Any dangers?
S

What did he do to get the silver to preciptate out? Fixer is usually sodium thiosulfate complex.

Either way, I'd crush and mix with soda ash and borax, then stir the heck out of it with a piece of steel rod.

@Snoman: This guy did not follow rule #1 of the refiner: Don´t throw anything away (until you checked it for PMs)
He discarded the 100l fixing bath, not knowing whether there was still dissolved silver in it.
The fixing bath was more than 15 years old. Maybe that stuff precipitated by itself over time, but maybe some also remained in solution. I could bite my fingers on this stupidity.
He obtained the gray solid residue by filtering the liquid first.
As I understand you, you would add flux, heat it and see what comes out? He did that with a small probe and obtained a tiny piece of silver. But he also stated that the whole process evaporated a very strong fume and smelled like "fixing bath".
You must log in or register to reply here.