[SOLVED] I Forgot To Wash My Silver Powder - Should I Do It At This Point?

I've been studying the forum threads, reading the threads and Hoke's book and processing gold and silver. This thread is about some silver contacts that I acquired a few months ago. It is 524g. 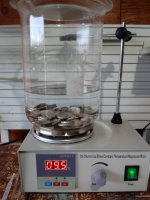 I dissolved the silver with Nitric Acid, filtered the solution and then I added table salt to drop the silver. At first all the sale went to the bottom of the beaker. I felt like the solution was too concentrated, so I transferred the solution into a 2 gallon bucket, then added some distilled water to the bucket and the solution became a white cloud. I added more salt until there was no more clouding.

After letting everything settle, I poured off the solution and this is what I had left. 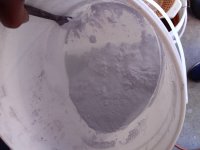 Since I felt I was using way too much corn syrup, I started using the Sodium Hydroxide and the reaction started. I kept doing it until the reaction of the Sodium /hydroxide ceased to show any reaction. I then let the solution settle for a few minutes.

And this is where I screwed up for the second time.
After letting it sit for a few minutes, I poured off the liquid, and then I put everything in a pyrex glass baking pan.

Without you having to ask me, no,.. my silly self did NOT rinse the silver to get rid of everything after the cemetation. I just poured off the top liquid and went to heat it in the bake dish. I know better, but somehow I forgot that part.

This is how the silver came out after drying it and stirring the dry powder around. 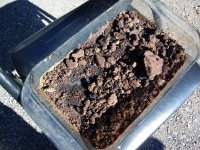 Silver powder after drying it and taking some out to melt.

As you can in the picture below, the silver is melting, but the problem is that it has too much syrup in it because when I put it in the melting dish, everything turns into a soupy substance, but the silver collects (sometimes) and I have to pour off the syrup because it actually boils in the dish without melting or dissolving away, using a MAPP torch. 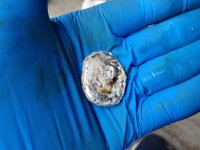 Now, with all of that said, I'm wondering if I should take the powder and put it in a beaker with some distilled water and boil off any and all stickiness still on the powered silver? And then dry it out and melt from there?

I was also thinking about taking the pieces that I get to melt as a solid, collect it, and then put all the solids together and melt is as either corn flakes or into a mold. The silver is melting from this powder, but it's leaving too much sugar, gluey surface around it, like it's borax or such, which it isn't borax.

I ordered 3 more silica melting dishes, because I broke the one I was using as I let the silver stick to it and I tried to pull it off and broke the crucible.

Let this be a lesson for newbies and anyone else wanting to refine. Study, study and study even more. I dropped the ball on this batch, BUT, nothing is lost. I melted around 70g of silver so far, and it doesn't even show a difference in the powder that's left to do. I'm confident I'll get close to 524g when I'm done.

TIP: If you are going to use the salt, sodium hydroxide and syrup method.... do this.. in this order...

salt (if the solution doesn't turn white or the salt drops straight to the bottom, you probably need to add water)
sodium hydroxide
syrup.

When I did do this method before, and doing it the way I am suggesting, I got a reaction with both the sodium hydroxide and corn syrup. But since I did the corn syrup first, I didn't get ANY reaction at all.

Anyway, I just wanted to reach out to the team here and hope some others can benefit from this thread. I'm not at a lost at all or stumped as to what to do, but curious

I am always pleased to learn from here. It's the best website on the Internet.

I forgot to mention that even though it didn't come out the way I expected, it did make me think about some brownies.... so I took a few spoonfuls and wondered how good it would taste if it was a real treat....

Anyone looking at this would never suspect that this is silver. 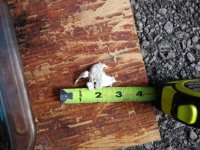 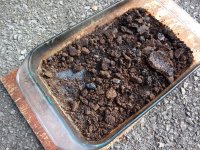 I did what I asked in my original post. I took all the powder and put it in a beaker and added water to it and boiled the powder about 3 times. The results were pleasing. The silver came out nice and clean. After rinsing it I dried it and weighed it. My yield is less than 524g of contacts,but I know a bit of the weight was copper.

Somewhere around 422g silver from those contacts. I'll melt it all together this week to get a grand total. I hope I don't have anything in the waste I set by itself. I'll soon see.

For anyone recovering silver using the sodium+syrup method, I would definitely recommend dropping the silver like this...

1. Add salt to solution until it turns milky white and curds form. Keep doing this until no more milky changes to the solution.

2. Once you complete the first step, drain off the remaining solution, but leave enough to cover the silver.

TIP: Pour that waste solution in a separate beaker or container, because that's Nitric Acid. When you added the salt and turned the solution milky white, it's pushing the Nitric Acid acid from the milky white (silver). This solution can be used for what you might need Nitric Acid for.

3. Now, slowly start adding Sodium Hydroxide to the milky solution. WARNING! it will start to generate heat heat, and if you add it too fast, it will probably boil to a point where it'll start popping like grits in a pot. Keep adding the sodium hydroxide slowly until the mix doesn't get hot any more. Also, you'll see that the color will change to a dark purple-ish color when you start adding the sodium hydroxide.

4. Start adding the corn syrup,slowly, just like in step 3. As in step 3, when you add the corn syrup, the vessel will start to get hot, and could boil if you add it too fast. Just add it slowly until it stops getting hot in the mix.

5. Drain off the remaining solution. There's noting in it. Then get the powder/cement into a filter and rinse it with hot water until the water is clear.

6. Dry, then melt your silver. 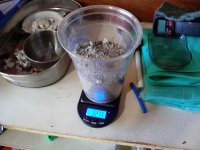 Thanks for the play by play. Ooooh the sweet taste of candied silver! Yuuuum

What did your contacts come out of? I have been breaking into tons of contacts, relays, switches and breakers. Everything is super small. Just curious what those beasts came from.
S

Ohiogoldfever said:
Thanks for the play by play. Ooooh the sweet taste of candied silver! Yuuuum

What did your contacts come out of? I have been breaking into tons of contacts, relays, switches and breakers. Everything is super small. Just curious what those beasts came from.
Click to expand...

I bought them off eBay. I'm not sure what they actually came from. They were the diameter of a US Nickle, but a bit thicker.

Here is the results of the silver. 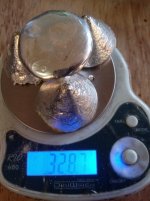 scrapparts
You must log in or register to reply here.

S
How Much Copper Powder Do I Use In My Stock Pot?